What is Banned Books Week?
Every year, libraries across the country observe Banned Book Week, bringing awareness to censorship efforts and celebrating your freedom to read books that have been a target of those efforts now and in the past.

The first Banned Books list was the Index Librorum Prohibitorum, a list of books and authors deemed heretical or immoral by the Catholic church, which its followers were forbidden to read without special permission. The index was officially abolished in 1966.
When is Banned Book Week?
This year, Banned Book Week is observed from September 27th through October 3rd.
Banned VS Challenged
When a person or group attempts to remove a book from a library, it is considered a challenge. If a challenge is successful, the book is banned from that library. Official challenges are rarely successful in getting books banned, but efforts to remove materials deemed objectionable don't always follow official channels. In recent years, religious activists have hidden, defaced and destroyed "objectionable" books in public libraries.
More information
Visit the American Library Association's page on Banned Books week for more information, free printables and ways to get involved. 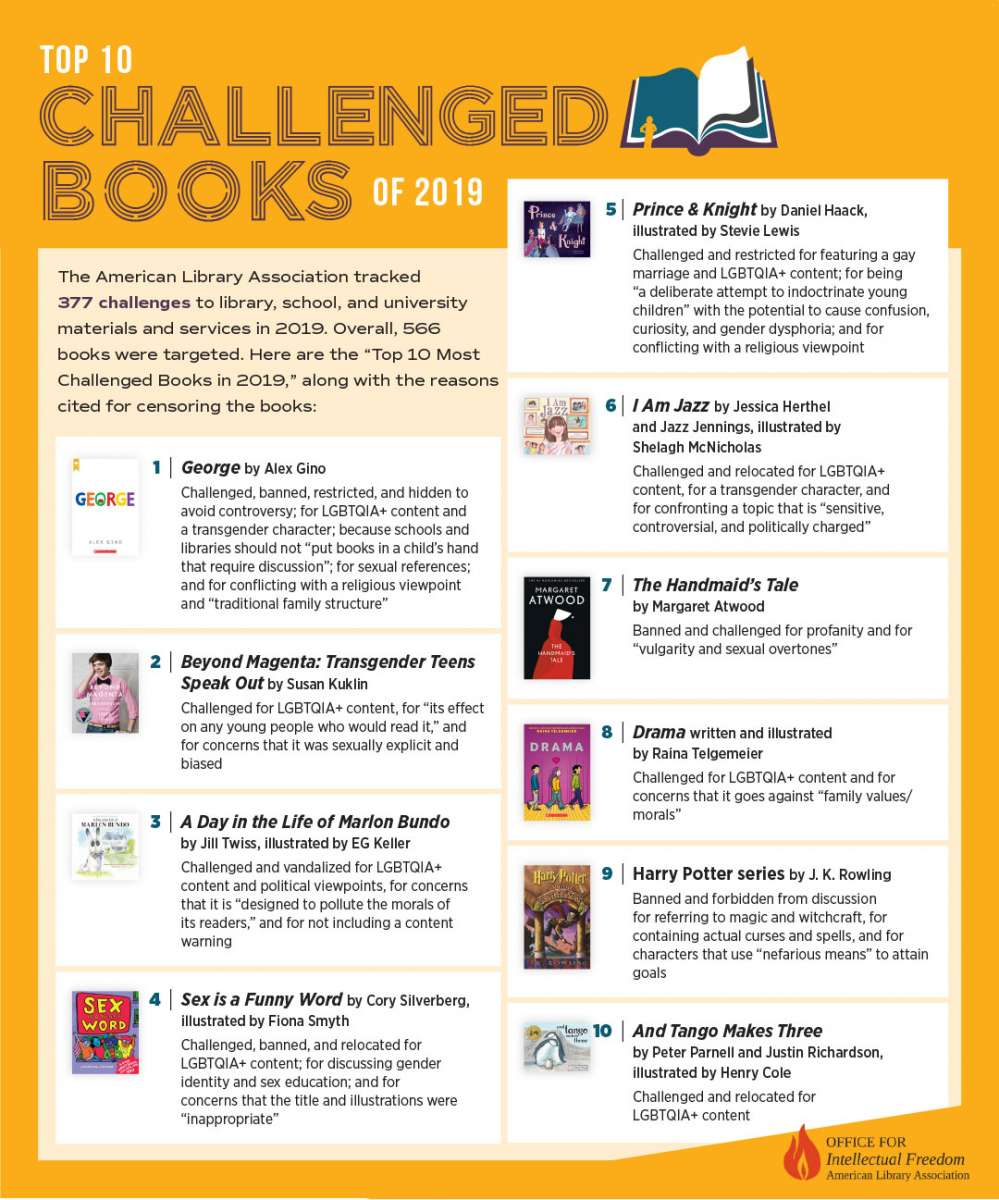 Most frequently challenged books by year:
http://www.ala.org/advocacy/bbooks/frequentlychallengedbooks
Banned/Challenged books in the DCTC collection:
https://bit.ly/2G1liMh
Select Reasons These Books in Particular Have Been Challenged/Banned:
A Wrinkle in Time by Madeleine L'Engle - This book has been challenged repeatedly on grounds that it is both too Christian and offensive to Christianity as well being pro-Communist, promoting witchcraft and just being generally "too different".

Adventures of Huckleberry Finn by Mark Twain - One challenge describes this book as "trash suitable only for the slums".

And Tango Makes Three by Justin Richardson - One of the most challenged books in recent years, this children's book is most often accused of "promoting the homosexual agenda".

Animal Farm by George Orwell - In a rare case of a book being banned in an entire country, this classic was banned during the cold war both in the USSR (for being anti-Communist) and the USA (for being pro-Communist).

The Autobiography of Malcolm X - Challenged as a "how to manual" of criminal behavior. At least one objection also cited "anti-White" sentiments.

Black Beauty by Anna Sewell - Briefly banned in South Africa because it has the word "black" in the title, offering possible clues why "The Red Badge of Courage" might have been banned for reasons that are unclear during the cold war in America.

The Bluest Eye by Toni Morrison - Challenged for the spectacularly vague reason that it "contains controversial issues".

The Call of the Wild by Jack London - Copies were burned in Nazi Germany, which declared it "too radical". Today, it is usually just challenged as being inappropriate for age-level.

Charlotte's Web by E.B. White - Challenged as recently as 2006 in a Kansas school district for its ("blasphemous and unnatural") depiction of talking animals.

The DaVinci Code by Dan Brown - Very frequently a target in recent years, it is described as being "offensive to Christianity".

The Diary of Anne Frank - Often challenged for honest descriptions of a pubescent girl exploring her sexuality, the Alabama State Textbook Committee called for the famous Holocaust diary to be banned in 1983 as it is "a real downer".

Fahrenheit 451 by Ray Bradburry - A school in California once allowed this book on censorship to be used only after all instances of "hell" and "damn" were blacked out.

A Farewell to Arms by Ernest Hemmingway - A school district in New York defended a challenge against this war classic in 1980. The challenge described it as a "sex novel".

Germinal by Emile Zola - In the late 1800s, everything Zola wrote was added to the official Index Prohibitorum maintained by the Vatican. More recently, it has been challenged for being "a call to revolution".

Harry Potter by J.K. Rowling - One of the most frequently challenged series in recent years, it is accused of promoting witchcraft.

The Lorax by Dr. Seuss - Objections to this children's book generally worried about its promotion of environmentalism and more specifically that it portrayed the logging industry negatively.

Lord of the Rings series by J.R.R Tolkein - see: the Harry Potter series.

Merriam-Webster's Collegiate Dictionary - Was pulled from a school district in California in 2010 when a parent complained their child had found a definition for "oral sex".

Oil!: a novel by Sinclair Lewis - Socialism! This is also the reason Lewis' "The Jungle" has been repeatedly challenged.

Romeo and Juliet by William Shakespeare - is often challenged for removal from schools on charges of encouraging teens to have sex and disobey parental authority.

Where the Sidewalk Ends by Shel Silverstein – Has been accused of promoting cannibalism.

The Wonderful Wizard of Oz by L. Frank Baum - Challenges cite "negativism", the "theologically impossible" claim that there is such a thing as good witches and its depiction of women in strong leadership roles and generally providing "no value for children".