Guinness World Records acknowledges Sherlock Holmes as the "most portrayed" character in the history of literature. Nearly 100 actors (and one actress so far) have played him in major movie and television productions dating back to the very beginning of the mediums and on stage before that where William Gillette (pictured right) played him so famously that he forever cemented the image of Holmes smoking a calabash pipe in everyone's collective psyche - something he never actually did in Doyle's stories. Fun fact: Holmes never wore a deerstalker in the stories either. Sidney Paget's illustration that accompanied one of Doyle's stories is responsible for that, again, probably cemented in cultural memory by Gillette.

In addition to the original 60 stories written by Arthur Conan Doyle in the late 1800s and early 1900s, there have been countless spin-offs, "lost" tales and pastiches written featuring Holmes and his companion Doctor Watson. With so many works over so many years, it is understandable that the deerstalker and particular design of pipe were not the only details that have become accepted “canon” by many fans of the detective despite the fact that they were not in the original Holmes stories. William S. Baring-Gould is personally responsible for several of them, having written a fictional biography of the character 30 years after Doyle’s death that claims his full name is actually William Sherlock Scott Holmes, he has a second older brother named Sherrinford (the name Doyle was originally going to use before his wife and some publishers convinced him it was terrible) and he had a child with Irene Adler (which the writers of Star Trek used to claim Spock as a distant relative).

Another "fact" from Baring-Gould's book is Sherlock's birthday, which is never mentioned in any of Doyle's stories. He chose January 6 and many fans still acknowledge it. But even more prefer to celebrate May 22, Doyle's birthday, as "Sherlock Holmes Day".

The University of Minnesota boasts the largest collection of Sherlock Holmes and Doyle adjacent works. The collection is searchable but closed, with materials available for use in a special reading room by request. Our library’s collection is nowhere near as comprehensive, but we may be able to get you started if you want to venture into the world of the most famous literary detective.

This guide created by: 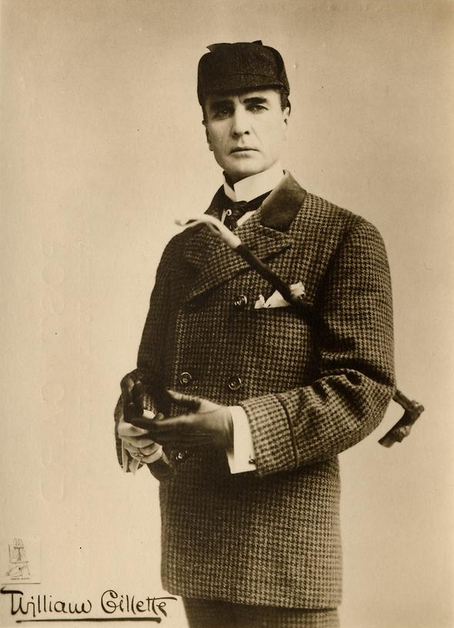 Due to differences in copyright in several countries, not all editions of Doyle’s complete works actually contain all of the Holmes stories. All of these are available in print in the library in the fiction section (FIC Doyle Arthu) in various combinations. Most of them are available online, though the Case-Book is not included.

As of January 1st, 2023, ALL of Doyle's original Sherlock Holmes stories are in the public domain and can be found free online. The entire print and ebook collection is available in the library. The complete series is as follows.

A Study in Scarlet
The first Sherlock Holmes story, often making lists of banned books due to its depiction of the Mormon church.

The Sign of Four
The second novel, featuring the introduction of Mary, who would become John Watson's wife for a while before disappearing with minimal explanation.

Memoirs of Sherlock Holmes
A collection of 11 short stories ending famously with the death of Sherlock after a battle with Professor Moriarty (who only really appeared in this one short story where he had no lines).

The Hound of the Baskervilles
A novel told in flashback of a case that happened before Sherlock’s death and didn’t feature him much at all. Is often classified as a horror story.

The Return of Sherlock Holmes
A collection of 13 short stories reviving Sherlock after ten years and much demand from fans that Doyle take back the whole Reichenbach thing.

The Valley of Fear
The fourth and last novel, usually considered the weakest of all Holmes stories.

His Last Bow
A collection of 10 short stories, ending with the outbreak of the first World War.

The Case-Book of Sherlock Holmes
A collection of 12 short stories that is sometimes omitted from collected works, both for reasons of copyright and because some people just don't like them and doubt Doyle actually wrote them.

Doyle made a number of off hand comments throughout canon to other stories Watson didn't tell. Many pastiche make use of this with stories like "The Giant Rat of Sumatra" and the BBC "Sherlock" episode The Abominable Bride. This is one collection of notable works.


The House of Silk and Moriarty
FIC Horrow Antho

One of the more famous series of Sherlock Holmes pastiche.

This is the sixth installment in Larry Millett’s series, which weaves Sherlock Holmes into Minnesota history.

A feminist take on Holmes lore with the detective taking on a protégé. The first in a series.


The Scientific Sherlock Holmes?: Cracking the Case with Science & Forensics .

In the DCTC Library

Dressed to Kill
The Secret Weapon

These are both from the series of movies starring Basil Rathbone as Sherlock Holmes. Both are largely original stories, though "Secret Weapon" is loosely tied to "The Adventure of the Dancing Men".


The Adventures of Sherlock Holmes

Ronald Howard (no relation to the director) stars in a 1950s series.


The Hound of the Baskervilles: Episode 1, Episode 2, Episode 3, Episode 4

A BBC miniseries from 1982 starring Tom (The Fourth Doctor) Baker.


We Are Legend - Sherlock Holmes Against Conan Doyle

Available from other libraries

Another Sherlock Holmes VS Jack the Ripper story

A loose, animated adaptation where "Sherlock" shares a name with his most famous actor: Basil.

An elderly Holmes retires to Sussex to tend bees.

The most faithful adaptation of Doyle's works, starring Jeremy Brett.


Sherlock: Season 1, Season 2 and a couple other seasons Holmes fans don't talk about