As a member of MnPALS, you join library staff members at 57 libraries throughout the state of Minnesota. We gather in person and virtually to share knowledge and network with colleagues, primarily around the use of our shared integrated library system (ILS), Ex Libris’s Alma/Primo VE.

This guide is intended to serve as a resource for you, not only now as you get familiar with MnPALS and the PALS office, but also as you get more comfortable in your role and are looking to expand your understanding. Please refer to the Table of Contents on the left to navigate to a particular topic.

PALS (Program for Automated Library Systems) is the 13-member library technology systems, support, and training team for MnPALS. Organizationally, we are a part of the system of Minnesota State colleges and universities, but we support all our members equally. Our office is a member of the Consortium and manages the ILS contract and provides ILS support and training.

PALS uses customer relationship management (CRM) software called the PALS Support Center to track support requests, host documentation, and publish articles in a knowledge base. The CRM software has both a web-based end-user interface for our customers as well as a web-based agent interface for the PALS staff. The software allows us to efficiently route your support requests to the appropriate PALS staff and to publish answers to frequently asked support questions.

Questions?
If you have questions about this guide or anything related to it, please either submit a Support Center ticket or email Johnna Horton.
Table of Contents

For a complete Primo VE glossary, see Ex Libris' Online Help - Primo VE Glossary
Other Tech
Other Important Terms
MnPALS Connections
The graphic linked in the left panel represents the MnPALS governance structure. Created when PALS first started developing its own software (circa 1979), this model is a true participation model where voices are heard at several levels before making modifications and enhancements to the integrated library system (ILS). Over the years, we've moved to a vendor-supplied ILS that doesn't require the level of member guidance of software development represented by this structure. Recently, the discussion has begun about what a new governance model might look like. Conversations are currently underway and changes may be coming soon. Not represented on the graphic are Task Forces (appointed by the Executive Committee), Working Groups (informal bodies that come together around a particular project and are limited to that one project), and Interest Groups (informal bodies that come together to explore topics of interest for professional development purposes.)

Graphical representation of the connections MnPALS has to other organizations 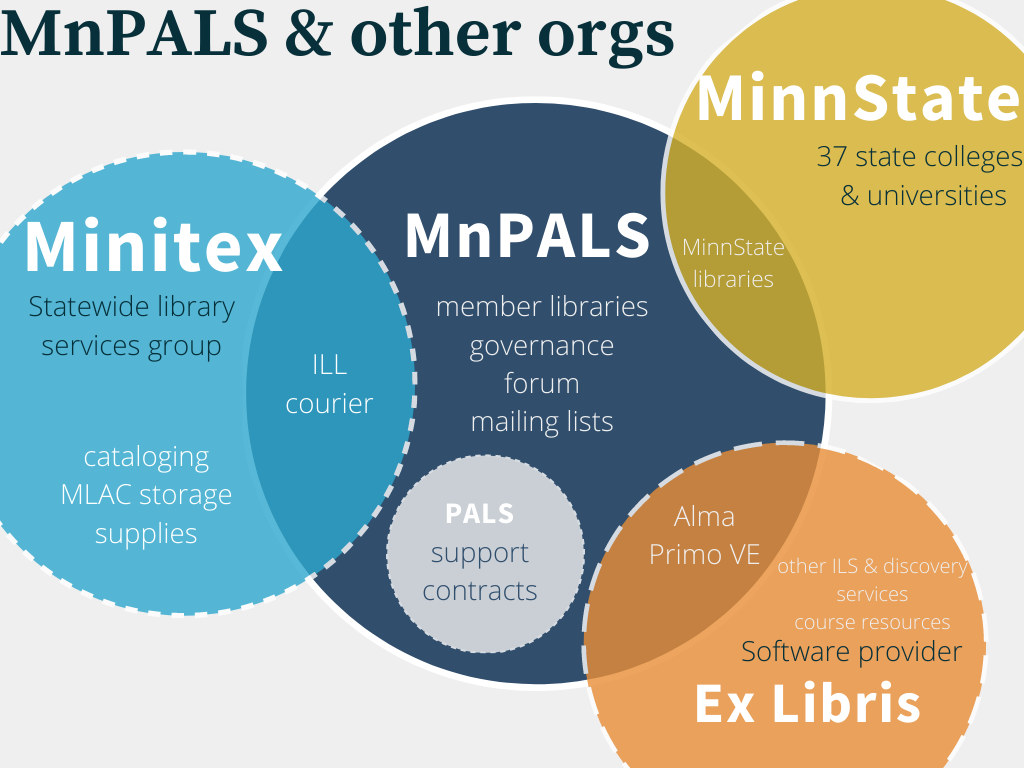 Questions about Booking, Resource Sharing, or Analytics? Send us a support ticket.

Documentation created by PALS for EZproxy
SubjectsPlus
SubjectsPlus, an open-source application for research guides
This guide is an example of a SubjectsPlus implementation designed and managed by PALS

Documentation provided and maintained by the community
Table of Contents

In a consortium the size of MnPALS, communication is important and always a work in progress. The consortium currently relies almost entirely on email, so the two main ways of getting involved are as follows:

2) If you'd prefer a less public way to signal your interest, you can email Johnna Horton (johnna.horton@mnsu.edu) or another consortium colleague who can connect you with people around a certain topic.

*Note: the governance structure recently changed and more work is being done to establish membership in the groups listed below. For now, if you are interested in participating in a policy group, contact Johnna Horton and she will get you connected with the right people.

MnPALS Consortium Board
The Board is the governing, representative body of library types in MnPALS.

For more details about the Board and all other consortium engagement opportunities, go to the Governance Structure page at mnpals.org.
Policy Groups
Policy groups exist to create and review consortium-wide policies and recommendations that are ultimately approved by the Consortium Board. If other policy groups need to be created, members should bring that interest to their representative on the Consortium Board, which will approve or deny the request.

Interest Groups
Interest groups (also called communities of practice) are informal bodies that assemble around a topic or area of interest. These are convened by anyone and can be attended by anyone. An example of a recently active interest group is the Futures Interest Group who gathered to discuss technology and future-looking practices coming to libraries.
Task Forces
Task Forces conduct defined investigations that further the mission or clarify operations of the consortium. The Board establishes Task Forces. Task Force projects are limited in scope and have a charge to accomplish.